How to Be an Assertive Recruiter (Without Seeming Aggressive)

Assertiveness and aggression are two very different things, but when it's reaching month-end and you're under pressure to hit your recruitment targets, an assertive sales approach can become aggressive pretty quickly (and in this case, you can kiss the opportunity goodbye!).

So, what’s the secret to getting results without coming across as aggressive to prospects, clients and candidates? 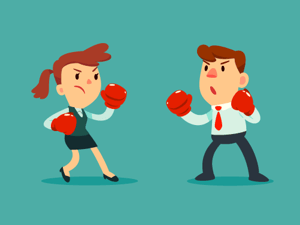 The first step to practicing assertiveness effectively is to understand, and be able to recognise, the basic differences between passive, aggressive and assertive phrasing when speaking to candidates, clients and prospects.

Let’s consider a passive approach first: Imagine you’ve just had a candidate out for interview with a client and you’re setting out next steps you’re expecting from the client.

Here’s an example of a passive approach:

Passive phrasing like this doesn’t move the act of making a placement forward. Instead, it creates an additional step that’s irrelevant to the decision-making action. Recruiters make the mistake of adopting the passive approach out of fear of losing the placement, fear of offending clients, and essentially just a fear of selling.

The aggressive approach (otherwise known as the ‘hard sell’) often antagonizes clients. Even if the client does make a decision, you’ll leave a bad taste in their mouth and sever the chance of any future repeat business. And more often than not, they’ll find a way to delay making a decision until the pressure is off.

This, by contrast, is the assertive approach:

The assertive approach is neither pushy nor weak – instead, it creates a discussion that helps both you and the client better understand what's going on, and what you can do to move the decision process forward.

The differences between each approach might seem small, but they can make a huge difference in how both clients and candidates perceive you.

Know how to take ‘no’ for an answer

Always accept the answer you’re given, even if you don’t like it! Being pushy when a candidate or client has already given you an answer is not the way to turn a decision around. 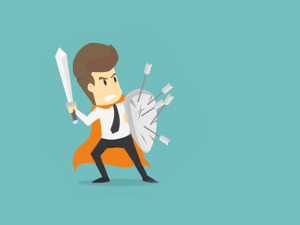 Let’s say you ask a prospect the following:

“What is your biggest challenge when attracting talent?”

and the prospect responds…

“I don’t feel comfortable telling you.”

A lot of recruiters will feel worried they’ve crossed a line with the prospect when they get a response like this but in reality, it’s how you handle their response that really matters. If you accept and respect the answer and move onto your next question, this shows you can take the answer ‘no’ with respect and dignity at the same time as showing you aren’t afraid to ask difficult questions. And that is the recruiter every client wants to work with.

Be assertive from the start

Often recruiters will prefer to wait until they’ve built a good rapport with someone before they’ll ask any difficult questions. The logic there is that if we can get on the right side of someone first, it’ll be easier to get the prospect or candidate to open up.

However, there’s a big problem with this technique that many recruiters don’t always consider: If you’re too passive initially and then make the switch to being assertive later down the line, it will feel totally out of place and potentially sever the relationship completely. With this technique, your prospect or candidate may think the rapport you’ve been building all this time was never genuine, and this can be damaging not only to this particular relationship, but to your reputation as a recruiter more broadly.

Instead, you should be practicing an assertive but respectful approach from the very beginning and be consistent with this. Dare to ask the hard questions before you’ve given the client or candidate everything they want, and you’ll have some leverage to get the answers you're looking for. Assertive recruiters make clients and candidates feel they're in safe hands – and that’s the key to winning new business.

Download our email template tool below for some examples of assertive emails that get results.

What's the Difference between an ATS and a CRM? Is Customer Success the Way Forward in Recruitment? Are Your Recruitment Emails Scaring off Candidates?